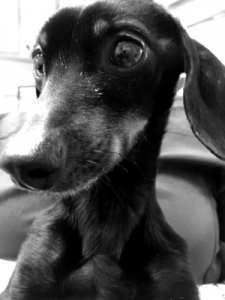 There are a few of my patients that I just can’t help but fall in love with. I want to introduce you to Ellie.

Ellie is a 2-year-old miniature dachshund, with big eyes and a huge personality. This little girl is happy about life and loves her family!

I met Ellie just a few weeks after graduating from OSU when her owners brought her in for evaluation. Ellie’s case was puzzling. She had been doing good; eating and drinking without any problems. But, one day she started vomiting her food back up. The medical term for when an animal vomits whole food right after a meal is “regurgitation.” We did a series of x-rays and bloodwork, but they didn’t provide any answers. 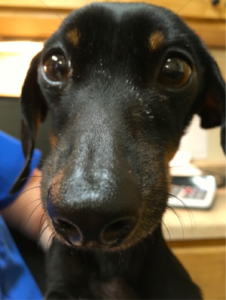 I diagnosed Ellie with “megaesophagus” (meaning big esophagus). Ellie’s esophagus was big and not allowing food down her throat to her stomach like it should, making her vomit every time she ate. What makes megaesophagus frustrating is that it is normally caused by something else. So…. the case wasn’t quite solved yet.

We were able to manage Ellie’s megaeosphagus by feeding her little chunks of soft food, in an elevated position, and keeping her “sitting up” for 15 minutes after each meal. We did add on a few medications, but the most important part of managing her illness was to keep her head up so the food would go down the esophagus and into the stomach. Ellie did well for several months. Every once in a while she would come in for occasional regurgitation, but with a little bit of fluids and some cerenia (anti-nausea medication), she would do really well.

We (the owners and myself) decided to send Ellie to another clinic in Tulsa for more diagnostics. Ellie was diagnosed with Myasthenia Gravis, which is Latin for “grave muscle weakness.” It is a neuromuscular disorder, disrupting communication between the nerves and muscles. It causes weakness in the animal’s muscles, like Ellie’s esophagus muscles not working properly.

A few weeks ago Ellie was rushed in because she had eaten a lot of dry dog food that was for the other dog in the house. She was just so hungry she couldn’t stand it and wanted it all! Kind of how I get sometimes……

She was breathing heavy, shaking, and depressed. The owners were on the verge of making the decision to put her down because they didn’t want her to suffer.

Now you see…. I love all my patients… but there’s just something so special about Miss Ellie, I just couldn’t give up on her yet. I asked the owners to give me 24 hours with her. If she was not showing some improvement by the next day, we would talk about the “decision.” More x-rays of Ellie’s chest showed severe pneumonia. Ellie was put on some antibiotics and fluids right away. The next day I saw about a 10% improvement. The owners said I could keep going. The next day even more improvement. By the third day Ellie wanted to eat again! 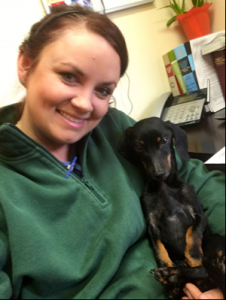 Remember I told you that Ellie has to be elevated (sitting up) while she eats and 15 minutes after she eats? Yep… you guessed it! My staff and myself all took turns carrying around this cutie pie for a whole week, four times a day!

I think Ellie’s story is one to be cherished. Ellie is doing wonderful and enjoying her time with her family. Unfortunately, there’s no cure for Miss Ellie’s condition, but with proper care and management, she can still have a full, happy life.